“when the earth is ravaged
and the animals are dying,
a new tribe of people shall
come unto the Earth from
many colors, classes, creeds
and who by their actions and
deeds shall make the earth
green again.

They will be known as
The warriors of the rainbow.”

This is the very prophecy that the rainbow movement, philosophy, idea, family is based upon.

I met the rainbow for the first time in September of 2017, while staying at the Buddhilde, a community in Rostock.
The philosophy of the Rainbow is that of love and light, respecting all that is in its interconnectedness and living close to and with mother earth – in freedom, in peace and harmony.
Starting in the 80’s in the USA, the ideas of the rainbow have spread all over the world.
The family gets together in rainbow gatherings in predetermined places – favorably far away from civilization – for a month at a time starting with the new moon.

After I met the rainbow I first got to know it a little bit through the virtual world. I realized there that just like the rainbow – the rainbow brings people of all colours and they naturally carry and mirror the problems of our civilization – fear and anxiety, not being right, holding on, lack of consciousness, defensivness but of course also the light, the love, the warmth, the acceptance.

In Sweden I was warmly welcomed by a rainbow family in their cozy house in Vika. And through the months some more rainbows crossed my path in real life and in the virtual world. Just like Bobâ in Kassel.

It was time to dive in and go to a gathering. I would have liked to ease my way in at a small one but time and logistics let me end up at the anual European Gathering – this year in Poland – with a few thousand people expected.

I felt a bit anxious – so many people, Raki by my side, shitting into a hole in the ground, no toilet paper, those mentioned tensions that were present in the family and carrying my 20kg tent for 30 minutes. But I was curious and open and ready to dive in.

I arrived home. I was welcomed warmly amidst family – people with curious open minds, willing to help out wherever they can. I enjoyed the openness as it is something so inherent in me but often overwhelms others. Here it was just normal to approach people you had never seen before, greet them, hug them.
I immersed myself in the rainbow – singing, dancing, learning, connecting. I found an abundance of teachers from all over the world, willing to share their expertise. I practiced a lot of massaging, helping people with old and young injuries and pains and could feel how I was getting better and getting great feedback.
And the music – oh the music. There, then, the music was what captured me most – one of a kind, talented musicians with a wide variety of instruments from common to rare, singing dancing, jamming, falling into trance.
The place was beautiful – rolling hills of yellow grass, interrupted by big and small patches of forest, a lush green valley with a gentle river running through.

The rainbow was the rainbow – the whole spectrum. Next to all the love and light there was also tension and dark. Incidents with dogs, trying to tell others what to do and how to do it, a lack of participation… We even had the chance to watch someone spiral down into a psychotic state of mind and how this temporary society dealed with it.

And the rain . . .
While the rest of Europe was having the heat wave of the century, we had rain – a lot.
After some days of sun and rain and thunderstorms the sun didn’t greet us for a week. I have long been training to accept things as they are and make the best of it and so does the family but after a while it gets very draining – ankle deep mud, cold puddles, paths turning into rivers, sliding down hills, mold in the tent …

I had clothing lines inside of my tent and would wear the same clothes all the time, letting them dry on my body to have the least amount of wet items possible. When I found mold, I put up my tarp and somehow managed to dry things.

I met many wonderful people and made many friends. Two very special ones were the two Italians – Seba and Ja. After two weeks of wetness they wanted to get out. I felt tempted as well and after noticing the bad smell that came from the giant mud fields, I decided to leave for a few days as well. I left my tent and intended to come back for the full moon ceremony.
The two guys decided to come with me and our party got completed by Angie, another German.

We searched for a lake and ended up in a touristic area in the very East of Poland. After some searching we ran into a hut in a beautiful location. IT seemed like a place for hay making and we ended up squating it for two days. Two days of nature, getting lost in the hang drum, relaxation and enjoying the nearby town.
From there we craved a shower and washing machine. The guys wanted to do some basking. So we ended up in an Air bnb in Rzeszow and doing exactly that. We had a wonderful time …

The full moon was coming closer and time to go back to the rainbow. The guys decided they didn’t feel the rainbow anymore and wanted to continue West and South. I enjoyed travelling with them a lot and felt like it wasn’t time to say goodbye yet. I had loved the experience at the rainbow but it felt like it was time to say goodbye to the European one. We went back for a night and a day. It was mindblowing – the village had become a city. I wondered around in bliss, marvelling at what people had created there. I saw many faces light up when they saw me again after some days of absence and shared contacts.

The day of the full moon – many arriving for the party, some seaming like party tourists. We took all day to say goodbye, find each other and pack up. I said goodbye to lovely Angie who decided to stay there and in the evening we left. Next destination: Berlin. 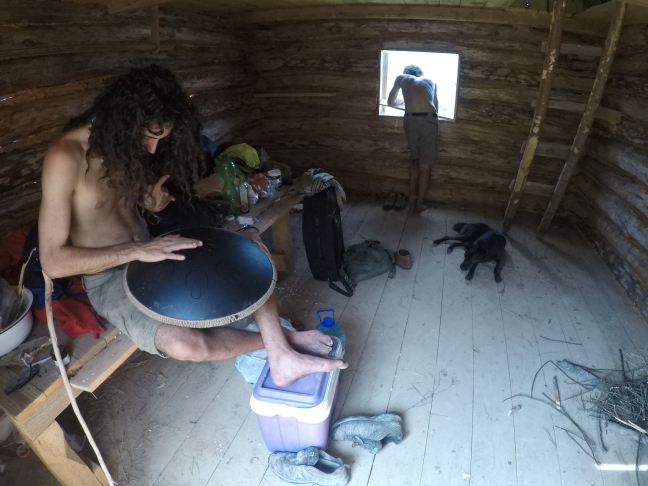 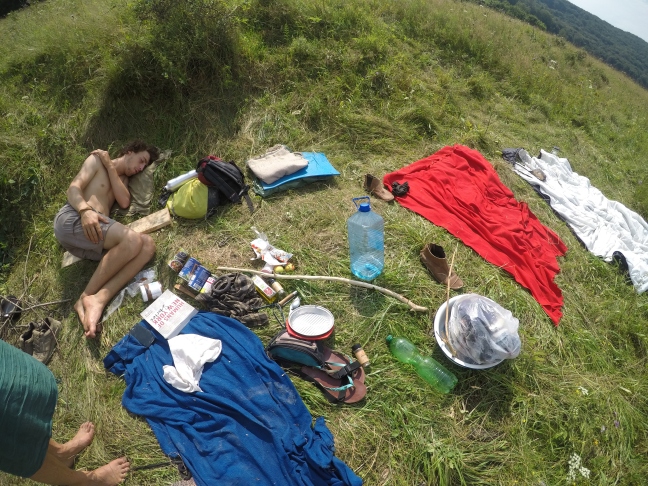 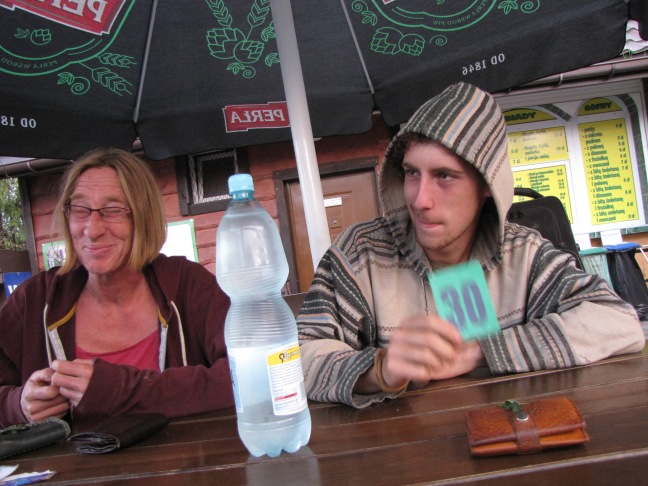 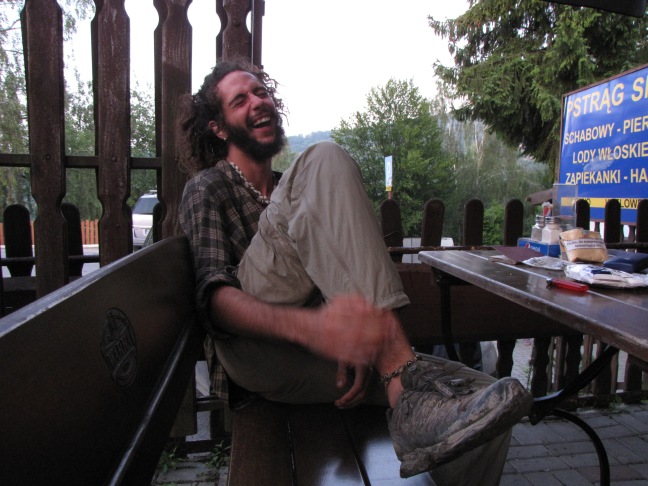 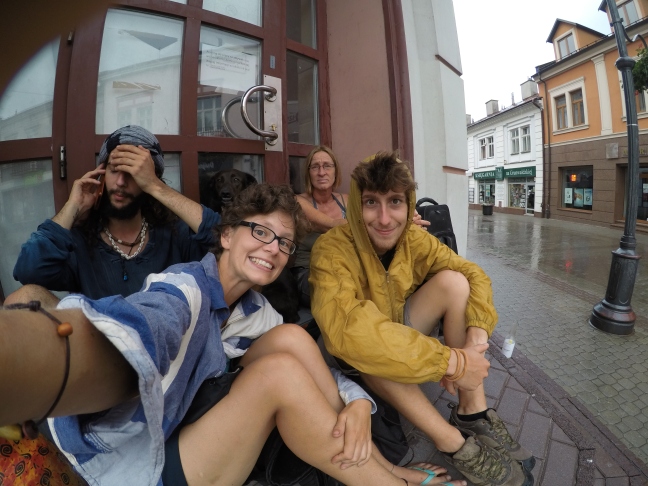 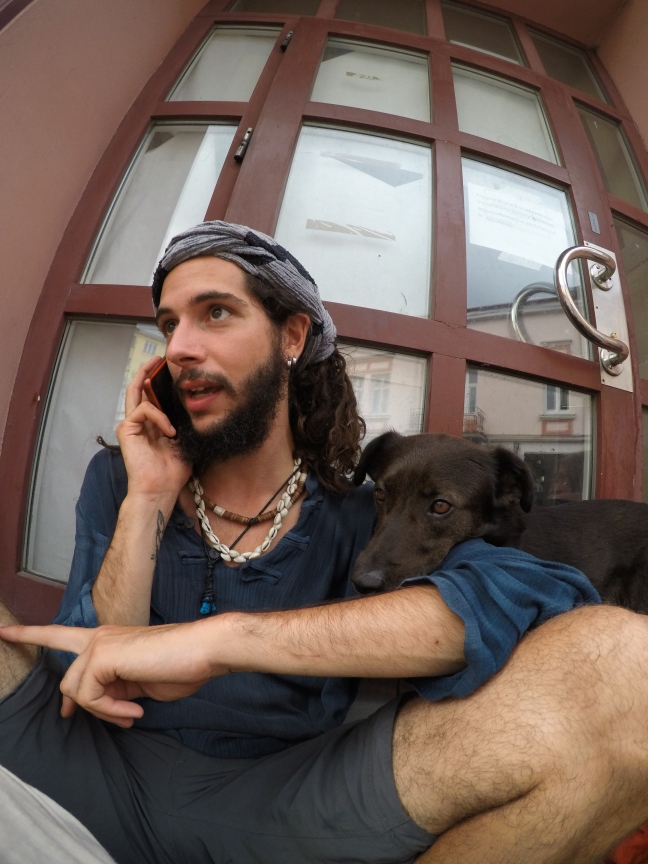